The newly formed association’s first priority was to find a permanent home for the Ball.  They borrowed $6,000 and commissioned local contractor Andy Spraberry to construct Pioneer Hall which was completed in 1940 and has served as the Ball’s permanent home from that time.  Integral to preserving the history and tradition of the Ball, is the preservation and renovation of Pioneer Hall which has served as the historic Ball’s home for nearly 80 years.  Additionally, the members are equally committed to ensuring Pioneer Hall continues to serve Anson as a unique, community facility to be enjoyed by all.  In order to facilitate the renovation process, the Association incorporated as a 501 (c) (3) nonprofit entity for educational and historical preservation purposes in 2009.

Please contact us if you interested in helping preserve and promote this unique and historic celebration of our heritage.  We welcome your assistance and will appreciate all financial contributions.

Most importantly, we invite you to join us in Anson for that
“Lively Gaited Sworray, The Cowboys’ Christmas Ball” 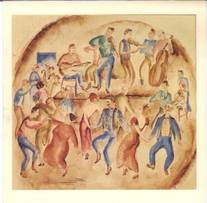